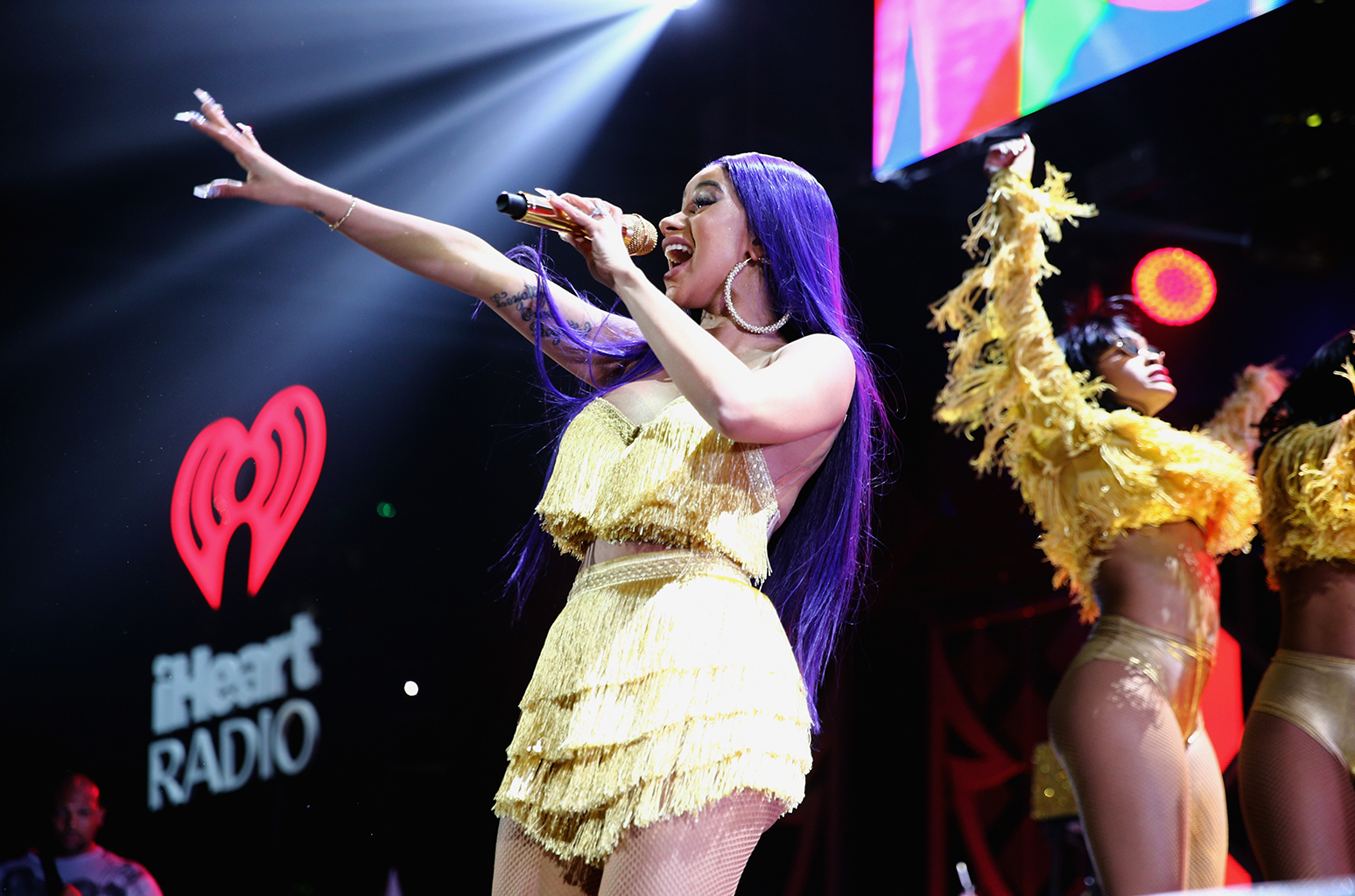 The Forum in Los Angeles brought some of the biggest names in music to the stage last night (Nov. 30) for KISS FM’s iHeart Radio’s annual Jingle Ball concert.

From Bebe Rexha‘s stellar opening performance to Cardi B‘s fiery closing, the show kept up the high energy throughout the night. History was made with K-Pop group Monsta X becoming the first Korean group to perform at the JingleBall and many other surprise guests thrilled the audience.

Check out the highlights from the Jingle Ball concert below.

1. Bazzi gushes about working with Camila Cabello and his dream collaborator

Bazzi was the first to walk the Jingle Ball red carpet and the second to perform for the night. When asked about his recent performance at the Macy’s Thanksgiving Day Parade, he joked, “It was so absolutely cold, it was the coldest I’ve ever been in my entire like, like 100%.”

He also revealed to Billboard what it was like to re-release his track “Beautiful” with fellow Jingle Ball performer, Camila Cabello.

“We just toured in April and became good friends,” he said. “I really enjoyed her presence and energy. You know the element that she brings as an artist is really unique and unmatched so, I thought putting her on a song would bring a really cool element and perspective to it, and she definitely did … We kind of came up with [the music video] as we went.”

Finally, when asked about who his dream collaborator would be, he thought for a moment and said, “J. Cole, I love J. Cole. I think his bars are unmatched, his lyrics, all of the above, so good.” Maybe we’ll see it happen in 2019?

The “Home With You” singer performed at theJingle Ball Village before hitting the red carpet. Billboard caught up with her and asked about her recent collaboration with Migos’ Offset on her new track, “Hurts Like Hell.”

“I really wanted him on the record,” she explained. “he was my ideal person to have and I thought it was kind of a long shot, but then we ended up sending the song to him and we had [the track back] within like an hour, it was amazing.” On the topic of collaborations, she mentioned that while she doesn’t have any others lined up just yet for her upcoming project, she would “love to work with Daft Punk and Pharell, a lot of different people.” Finally, she teased a little bit of what’s to come in 2019. “A tour, new music, an album, hopefully!”

The seven-piece K-Pop band made history last night as the first Korean group to perform at iHeartRadio’s Jingle Ball. They kicked off their set with their hit “Shoot Out” and then shouted to the audience, “I know you guys can feel a little awkward about K-Pop … we are going to make this K-Poppin’ right now … are you ready to turn up?” They got the audience super hyped up for their final song “DRAMARAMA” by getting the audience to help out singing the opening lines.

Monsta X performed a total three of their biggest hits, complete with energetic choreography, pounding bass, and even confetti canons as the Forum lit up with screams from fans.

Shawn Mendes performed his biggest hits like “In My Blood,” “Stitches,” “Lost in Japan” and “Treat You Better.” He later thanked the audience for their ongoing support, sharing, “I’m the luckiest guy on the planet because of you all.” Just when everyone thought his set was finished, he brought out Khalid to perform their collaboration “Youth.” The performance was incredibly moving thanks to the inspiring message of the song and the emotion from the duo. At the end of it, Khalid gave Mendes a big hug and sweetly said, “I love you bro.”

During G-Eazy’s set, in which he performed “Him & I,” “No Limit” and “Me, Myself & I,” he brought out a few collaborators. “California” singer Anthony Russo joined him for a performance of their song “Rewind.” The rapper then let Russo command the stage to perform his solo track “It’s a Risk.” G-Eazy also brought out another friend, Marc E. Bassy, to perform their island-vibe hit “You & Me.”

Finally, Cardi B closed the show with spicy performances of “I Like It,” “Drip,” “Money Bag” and more. She brought husband Offset out to perform “Ric Flair Drip,” hyping him up during the performance before sharing a kiss on stage.

KIIS FM’s iHeartRadio Jingle Ball will take the Bill Graham Civic Auditorium in San Francisco tonight (Dec. 1) for its next stop on the tour. Some of the performers from the Los Angeles show will return the stage including Khalid, Calvin Harris, Bazzi, and Alessia Cara, in addition to Sabrina Carpenter and 5 Seconds of Summer.